The Battle Over Breakfast

This JAMA below is bit frustrating. The answer to their question is that more studies are needed.

The question of whether to skip breakfast or not is important for everyone, especially mothers: do I feed my child a sugary cereal which is fast & at least something or do I let them leave without eating anything. I go through this often, though we do not have any cereal at home & instead try to coax nuts,

homemade “cruncies” of tosted nuts, oats, coconut without honey & greek yogurt. It is a challenge. Do I make bacon & eggs which are low carb but likely artery clogging? Or do I let them fast but risk them feeling hypoglycemic in school.

Fasting, many MDs believe, is excellent for your body. This would root for skipping breakfast. But for kids, it is likely a bit different.

What is the right answer?

and fruit juice. It seems like a lethal combination. Do we say: at least it is something and gives the child some energy or do we say fasting would be better?

Everyone can agree that a protein based breakfast for kids is likely best. But what protein? And how much saturated fat is ok for breakfast for adults versus kids? Greek yogurt is likely great, but most kids will hate this idea if not trained to like it at an early age. Nuts are likely best. Protein-rich cereals without a lot sugar may be a good compromise.

What do I do? I skip breakfast always. I do not think it makes me less sharp or tired. On the contrary, if I ever do have something with some carbs in the am, I sometimes feel a hypoglycemic crash a couple of hours later.

I suspect this is true for most kids as well.
SLC

This is what the kids eat most often for breakfast:

For a special treat or rarely, we get these cereals. They have a lot of Carbs but they are better than other options.

Does Skipping Breakfast Lead to Weight Loss or Weight Gain?

Back in 1917, the same year that she cofounded the American Dietetic Association (now the Academy of Nutrition and Dietetics), Lenna Frances Cooper authored an article in Good Health magazine that noted “in many ways the breakfast is the most important meal of the day, because it is the meal that gets the day started.” Good Health was published by the Battle Creek Sanitarium, a Michigan health resort run by Cooper’s mentor, John Harvey Kellogg, MD, the coinventor of corn flakes (his brother started the cereal business that would become the Kellogg Company). 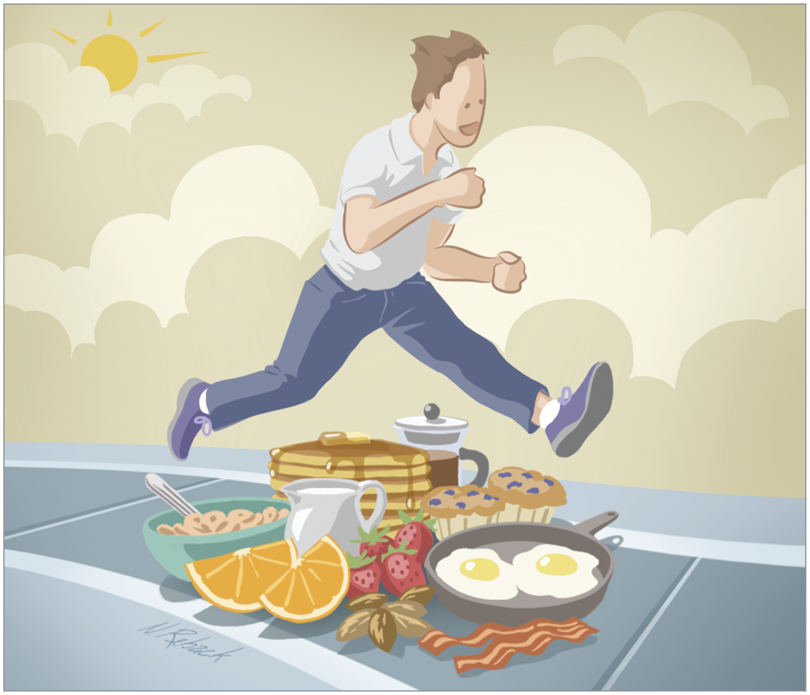 More than a century after Cooper’s article appeared, scientists are debating whether breakfast is important at all, let alone the most important meal, at least as far as weight management is concerned.
Although research into the health benefits of intermittent fasting suggests breakfast is the one meal that shouldn’t be skipped, a recently published systematic review and meta-analysis of randomized clinical trials looking at breakfast’s effect on weight and energy intake concluded that skipping it, rather than eating it, might help people lose weight.
The finding by Australian researchers challenges the widely held notion that skipping breakfast slows metabolism and leads to overeating later in the day.
“We are told that breakfast helps our metabolism and that skipping it will make us much hungrier so we’ll overeat and put on weight,” Tim Spector, MB, MD, a genetic epidemiologist at King’s College London and self-described breakfast eater, wrote in an opinion piece accompanying the study. Spector noted that despite many national guidelines stressing the importance of eating breakfast, around a third of people in developed countries skip it.
One reason experts were misled, Spector wrote, is “because multiple observational studies have shown that obese and diabetic people skipped meals more often than thin people.”
What’s on the Menu?
A recently published study in JAMA Pediatrics involving low-income fourth through sixth graders in Philadelphia concluded that providing breakfast in the classroom, as opposed to in the cafeteria before school started, had the unintended consequence of increasing incident and prevalent obesity, although not the incidence of overweight and obesity combined. The authors suggested that some of the children might have eaten before coming to school, so they consumed excess calories when offered breakfast in the classroom.
Of course, the goal of school breakfast programs is not weight management, and a study published in 2015 in JAMA Pediatrics suggested that breakfast in the classroom improves school attendance. “We must remember that these programs were designed to counter food insecurity, not combat obesity, and offering students subsidized meals at school is obviously important if they would otherwise go hungry,” wrote the authors of an editorial accompanying the more recent JAMA Pediatrics article.
Scientists skeptical of the research linking breakfast to weight gain point out that the problem might be what study participants ate for breakfast, not simply that they ate breakfast. Scarfing down a morning meal high in refined carbs and sugar, such as doughnuts and many breakfast cereals, isn’t likely to help people manage their weight.
Reijo Laatikainen, PhD, MBA, a registered dietitian in Helsinki, Finland, noted in a blog post that the recent meta-analysis by the Australian researchers included studies in which breakfast typically consisted of juice with cereal and/or white bread. One study, Laatikainen noted, described breakfast as “bran cereal between 7 and 8 am, and a chocolate-covered cookie between 10:30 and 11 am.” Laatikainen then asked, “Does anyone really assume that such a breakfast would benefit weight management?”
In the Philadelphia school breakfast study, those randomized to provide the meal in the classroom chose not to offer hot items such as egg sandwiches and instead provided only cold items, such as cereal and muffins.
The problem is that cereal and muffins might not be filling enough, predisposing people to pig out over the course of the day, suggests a recent review article. The authors concluded that compared with skipping breakfast, breakfast meals consisting of solid food totaling at least 30 g of protein and 350 calories improved appetite control and satiety response.
“Given the current evidence surrounding the consumption of increased dietary protein at breakfast, it is appropriate to recommend the consumption of protein in the morning meal to improve appetite control, eating behavior, and diet quality,” said coauthor Heather Leidy, PhD, of the Purdue University nutrition science department. “In addition, higher-protein breakfasts have also improved glucose control throughout the day.”
In response to a question on Twitter about whether the Philadelphia schools served juice along with cereal or muffins, Katherine Bauer, PhD, a coauthor of the JAMA Pediatrics article and a pediatric obesity researcher at the University of Michigan School of Public Health, tweeted, “I would love to do another trial varying breakfast content, plus different meal delivery methods.”
Too Short and Sweet?
Although Bauer’s study lasted 2.5 years, most of those included in the article by Australian researchers, who acknowledged that the quality of the evidence was low, were too brief to provide answers, said both Laatikainen and Leidy.
“[T]he studies included were of such short duration that even compiled together, they simply cannot reliably conclude anything about breakfast’s utility to long-term weight management,” Laatikainen blogged.
Only 2 of the 12 studies lasted for at least 12 weeks—“the minimum duration to see meaningful changes in body weight,” Leidy said. Those that were only a few days to a few weeks in length should have been excluded, she said.
Neither of the 2 studies that lasted 12 weeks or longer tightly controlled what study participants ate for breakfast or varied the meal’s energy or macronutrient content, Leidy said.
“We simply do not have enough evidence to support or reject the idea as to whether breakfast impacts body weight,” she said. “With that said, there is increasing evidence supporting the effects of breakfast on weight management–related outcomes, including things like appetite control, food cravings, satiety, and snacking behavior.”
However, she said, more research is needed to determine whether a high-protein breakfast can prevent weight gain or lead to weight loss.